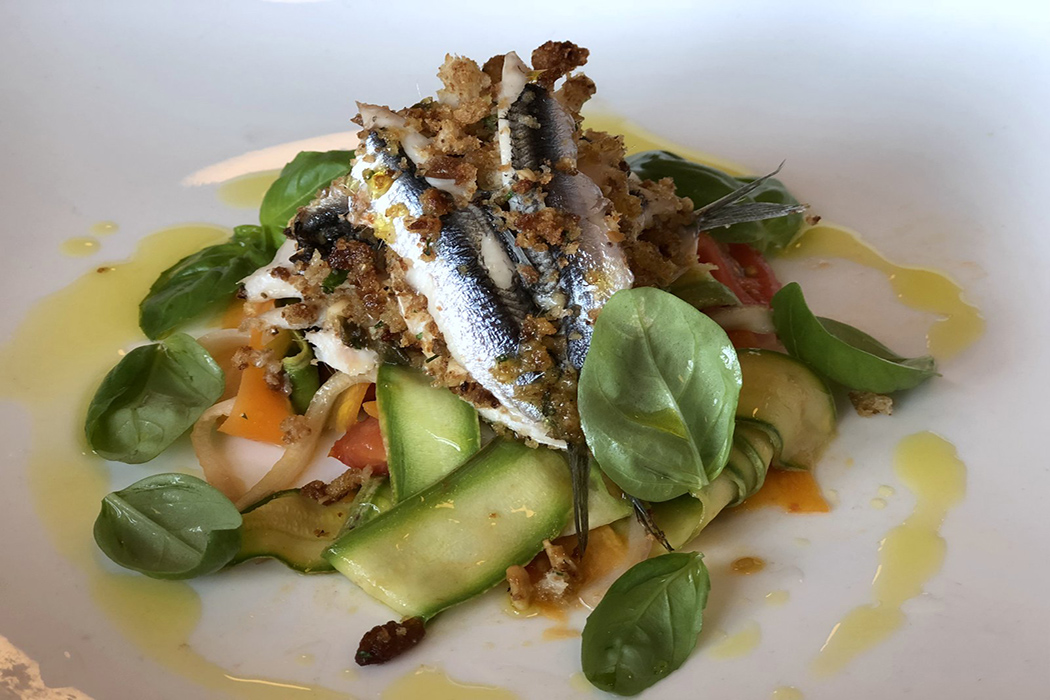 The anchovy is a blue fish rich in omega 3, selenium, phosphorus and calcium. The Italian anchovies are quite small and they are mostly concentrated in the northern part of the Adriatic Sea, but twe can fish some in Liguria, Campania, Sicily. Together with the home-grown it is definitely necessary to mention the highly valuable from the Cantabrian Sea. Here thanks to the environment between the glacial waters of the Atlantic Ocean, in northern Spain and the more temperate ones of southwest France, we can find exceptional marine species. Good oxygenation and low temperatures allow these fish to reach consistent sizes and developing a thicker layer of fat also the taste benefits.

Their fishing is limited from March to the end of June. The craftsmanship is exclusive to women’s hands, which are smaller and more precise.

The “surgical” fillet allows to prepare them, one by one, for aging 10-15 months under salt. Another interesting feature is the traceability, as a matter of fact inside each package we find a sheet with the indications of the time, place and name of the woman who prepared them. Of course, this meticulous activity drives up the price; in fact, they are much more expensive than ours.

Let’s go back to their story briefly. Between the end of the nineteenth century and the beginning of the twentieth century some Sicilian fishermen arrived on the Spanish coast in Cantabria. The best known, Giovanni Vella Scatagliota, arrived at Santoa, where he found anchovies much larger than those known so far. He was the first to realize that they had an extraordinary meat and taste; He began to devote himself to their fishing and processing, teaching the Italian techniques to the Spaniards.

Today in the village of Santoa there is a Brotherhood of the Anchovy from Cantabrico  with the aim to protect and to enhance its craftsmanship, its quality, its production area and any possible use in the kitchen. Recently we have seen the spread of these fish in Italian restaurants too.  A well-known example is “La Fenice” in Bergamo, which since the 1990s, thanks to its founder Beppi Bellavita, has been involved in the import and the distribution of excellent products, including these precious anchovies.

To end, we do not have to make a choice between these two very different products, with various destinations in the kitchen. The Cantabrians are not suitable for sauces, and to enjoy them the best way is eating them on a slice of bread with a little butter, or with a soft cheese.

This website uses cookies to improve your experience while you navigate through the website. Out of these, the cookies that are categorized as necessary are stored on your browser as they are essential for the working of basic functionalities of the website. We also use third-party cookies that help us analyze and understand how you use this website. These cookies will be stored in your browser only with your consent. You also have the option to opt-out of these cookies. But opting out of some of these cookies may affect your browsing experience.
Necessary Always Enabled